Since posting about the forthcoming MMORPG Air, I’ve discovered another online steampunk game that is in the works and will be much released sooner. The World of Gatheryn will begin beta testing in Spring 2009 and will be geared more for the casual gamer than most MMO’s have been lately. Founded in 2006, MindFuse Games has raised over $1 million dollars for the production of the game, and expects to raise more before the game’s release due to its niche market appeal.

As a casual game, The World of Gatheryn promises to rely less on combat than traditional MMO’s, and more on puzzles and problem solving. The combat will still be there for the gamers that crave it, but by putting more of a focus on strategy, it allows gamers to feel accomplished without needing to invest countless hours hacking and slashing to increase their character’s skill level. “The richest massively multiplayer universes have been largely violent fantasy worlds”, said Joseph Walters, Chief Executive of MindFuse. “Casual, friendly games on the other hand feel more like a snack than a feast. MindFuse is going to bring the two types of gameplay and players together – simple, compelling games embedded in a deep three dimensional world”. 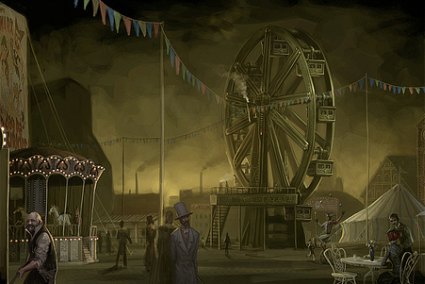 Drawing inspiration from the fantasy worlds of Jules Verne and HG Wells, Gatheryn is a Neo-Victorian styled world where people are struggling to free themselves from oppression by the evil overlord Marcellus Deering who controls their primary source of energy and light. It promises to be a story of love, romance, power and corruption. People travel about on steam-powered dirigibles and exotic boats, lending to the world’s sense of depth.

Upon arrival in Gatheryn, players will find themselves in Fog Town on Elymia Island. Through interaction with the town’s residents, characters will be sent on quests and solve mini-games scattered across the island. Each quest solved will enable new opportunities for your character, thus enabling you to control the path of gameplay as you desire. With your earnings from completed quests you will be able to buy the standard costumes and accessories, pets, which range from small, furry creatures to mechanical, steam-powered animal-automatons, and even purchase and furnish your own lodgings which can be used as a home base and gathering place for you and your friends.New islands will become available to players as the game expands, offering new quests and mini-games, keeping the game constantly fresh and new.