Steampunk is Alive and Steaming

Steampunk is Alive and Steaming 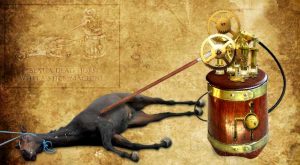 There’s no doubt steampunk as a subculture has gained a lot of momentum. But stating that steampunk has gone mainstream is as rediculous as claiming that it has jumped the shark or has otherwise died.

As with any sub-category of culture that begins with an underground following, steampunk is bound to become popular. And how could it not? There are many reasons steampunk will continue to grow, apart from the fact that punk’d creations look damn cool. But will it ever become mainstream? Except for cameo appearances in movies (like Stardust and The Golden Compass) no. I challenge you to walk up to ten random people on a city street and ask them what they think of steampunk. See how many even know what it is. Of course, the internet is a different story, but despite what some people may desperately choose to believe, the internet is not the world.

Take anime as an example. Anime is hugely popular on the internet, and both online and in real life, many people love anime. But not everyone who watches anime wears kitty ears or refers to themselves as -san or -chan. Those who do are generally seen as strange by the community at large. Steampunk is the same way. In fact, at a recent anime convention, being one of only six steamers there, I spoke to many people of how they liked steampunk, but found that none of them took an active part in the subculture.

Another example is goth culture. Goth originated in the Eighties and has always existed outside the mainstream. In the mid-Nineties it became popular and close to mainstream thanks to stores like Hot Topic. However, true goth culture evolved with the development of industrial music and cyberpunk, staying just outside the mainstream the entire time. Steampunk, being so closely connected to goth culture in the first place, will likewise evolve in such a way. However, steampunk also has an advantage over goth culture in the fact that good-looking steam gear is expensive. Unless you want plastic gears on your eyepiece, high quality accessories often cost hundreds of dollars, which won’t yield enough sales to keep Big Businesses satisfied.

Steampunk as a genre is a hundred years old. If you are worried that the subculture is just a passing fad, fear not, it is here to stay. And really, if is does slip from popularity, what are they going to tell you?

That your clothing style is outdated?