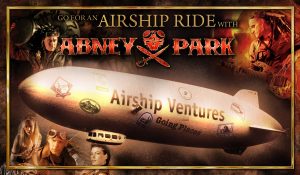 On October 31st, Airship Ventures will be launching the first commercial airship flight in the US in over 70 years. Abney Park will be along for the ride and is planning a historic mid-flight performance over the San Fransisco Bay. At the time of this posting, Abney Park’s website states that eight seats are still available, but doubtless, they’ve been snatched up pretty quickly. There’s bound to be a YouTube video of the performance and when it’s posted, it will show up here.

October 31st also happens to be the first day of the California Steampunk Convention, also taking place in San Fransisco.